Yesterday we drove from Hameln to Berlin. And today we meet for our tour on “Potsdamer Platz”. 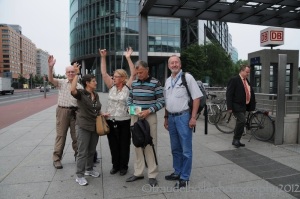 The once busiest intersection of Europe turned after the erection of the Berlin Wall to a wasteland right behind this wall. After the reunification the place became the largest construction side of Europe in no time. Now this all belongs to the past and the “Postdamer Platz” today is one of the most striking locations of the city.

The Sony Center is an ensemble of steel and glas with offices, shops, restaurants, flats, cinemas and much more.

There has been a lot of writings and talks about the “Monument for the murdered jews in Europe”, but to be there is something else. On the irregular depressed area concrete blocks of different heights (up to 4m) form an impressive place walkable from all sides. 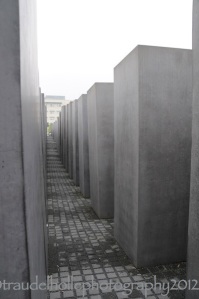 The “Pariser Platz” with the “Brandenburg Gate” at the West side was for 28 years prohibited area and wasteland. Only with the reconstruction after the reunification the square became again what it once was. Here are the French and American embassies located, as well as the Academia of Art and the famous Hotel Adlon.

Behind the unstriking front of the DZ Bank hides striking archtitecture. Hundreds of plates of stainless steel form a sculpure which appears like a huge whale. 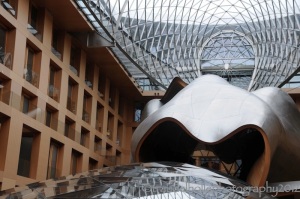